Venus Williams Could not have Taught that Forehand to Bryant McKinnie

I don’t know how to put this, but Venus Williams must be bored to death. First, she flew to Germany to sit there and watch a Fed Cup team she doesn’t care about lose 5-0. It was all a way to skirt rules to get into the Olympics.

Now, the news is that she’s spending time on court, while recovering from injuries, giving lessons to Minnesota Vikings offensive tackle Bryant McKinnie.

Really Venus? Meanwhile, Serena Williams is creating a national buzz by producing photos of herself in a pink bodysuit, hitting Miami Heat games and being seen out on the town.

Serena, who recently went over two million Twitter followers, Tweeted today a plea to start following Venus, who has just over 700,000.

Serena has nearly three times as many Twitter followers as her sister? It might have something to do with Serena always searching the spotlight, tweeting goofy things regularly. Venus, meanwhile, hasn’t tweeted in 2½ weeks.

It’s another great example of the contrasts between the sisters. Someone pointed out a long time ago that Serena was dating a rapper (Common) while Venus was with a golfer (Hank Kuehne).

Whatever happened to that relationship, anyway? 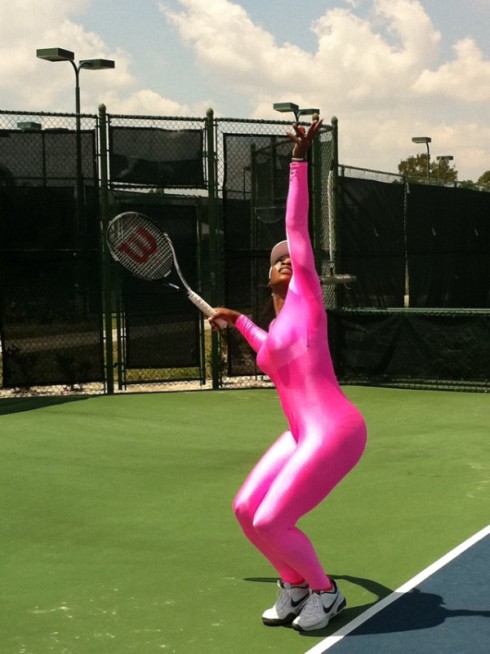 Well, McKinnie told the St. Paul Pioneer Press that he’s trying to drop 20 pounds, from 360-340 – though his listed weight is already 335 – and improve his lateral movement. He has asked for help from his friend, Venus, and he says he’s getting hooked on the game.

A look at the video shows that he has real potential, and maybe a future in the game.

Actually, that’s just the polite thing you’re supposed to say in a story like this. He can’t move. His forehand is wrong. His backhand is decent, though.

“One thing I learned with Venus,’’ McKinnie told the St. Paul paper, “you have to be ready for a long lesson.’’

Well, yes, tennis can be hard work. But it would be easier to stay in shape if you didn’t drink $100,000 worth of champagne in one night. In February, TMZ reported that McKinnie had dropped that much money on alcohol at an NBA All-Star party hosted by rapper Rick Ross and model Rosa Acosta.

Apparently, McKinnie had all the Beautiful People at the party in awe when he bought 15 bottles of expensive champagne, including, reports said, one so large it had to be brought to him with a forklift. Theoretically he shared some of it.

But that doesn’t exactly sound like a guy too worried about getting into shape.

Considering who she’s hanging out with, maybe Venus is leading a little more wild life than we realize, and just keeping in private. Probably not, though.

Serena is having fun and Venus is playing tennis with a 355-pound man.

No wonder she’s not Tweeting.

I can talk tennis all day long, and often do. And yet some of the people I talk to about it might rather I talk about something else. Or with someone else. That’s how it is with tennis, right? Sort of an addiction. Sort of a high. I am a national columnist at FoxSports.com and a FoxSports1 TV insider, and have been a columnist at the Chicago Sun-Times. In 2010, I was the only American sports writer to cover the full two weeks of all four majors, and also to cover each of the U.S. Masters series events. I’ve seen a lot of tennis, talked with a lot of players, coaches, agents. I watched from a few rows behind the line judge as Serena rolled her foot onto the baseline for the footfault, a good call, at the 2009 U.S. Open. I sat forever watching a John Isner marathon, leaving for Wimbledon village to watch an England World Cup soccer game at a pub and then returning for hours of Isner, sitting a few feet from his wrecked coach. I got to see Novak Djokovic and Robin Soderling joke around on a practice court on the middle Sunday at Wimbledon, placing a small wager on a tiebreaker. Djokovic won, and Soderling pulled a bill out of his wallet, crumpled it into his fist and threw it at Djokovic, who unwadded it, kissed it, and told me, “My work is done here.’’ And when Rafael Nadal won the French Open in 2010, I finished my column, walked back out onto the court, and filled an empty tic tac container with the red clay. I’m looking at it right now. Well, I don’t always see the game the same way others do. I can be hard on tennis, particularly on the characters in suits running it. Tennis has no less scandal and dirt than any other game. Yet somehow, it seems to be covered up, usually from an incredible web of conflicts of interest. I promise to always tell the truth as I see it. Of course, I would appreciate it if you’d let me know when I’m wrong. I love sports arguments and hope to be in a few of them with you here. Personal info: One-handed backhand, serve-and-volleyer. END_OF_DOCUMENT_TOKEN_TO_BE_REPLACED
This entry was posted on Friday, April 22nd, 2011 at 7:46 pm and tagged with Serena Williams, Venus Williams and posted in Serena Williams, Venus Williams, Williams sisters. You can follow any responses to this entry through the RSS 2.0 feed.
« Tennis Shows Selfless Heart for a Change
How Not to Develop a Prodigy: Donald Young Tweets “Fu– USTA.” Will USTA Dump Him? »