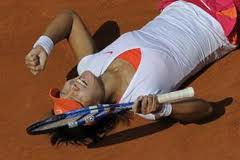 Just change it, Nike. Change it right now, or add it as a new campaign for Li Na. Li won the French Open Saturday, beating Francesca Schiavone 6-4, 7-6 (7-0) to become the first Chinese tennis player to win a major singles championship. It was thrilling, it was fascinating. Have you finished enjoying the moment, tennis?

Too bad. Time to get to work. You had better have a massive marketing campaign in mind. Li has already invented one, if accidentally by a slight language barrier.

Oh. My. Are you listening Nike? Are you listening tennis? She has just handed you a masterpiece. Li was likely talking about the Nike Campaign “Make yourself.’’ The company has hired famed photographer Annie Leibovitz to help. And maybe that will be a great campaign. Nike’s usually are.

But how about using her words? Li Na, and “Be Yourself’’ in Chinese. Think: Tennis, much like golf and plenty of other businesses, sees China as the great under-tapped market. It has put tournaments there, but the stands are half empty. Now, China has its first tennis star, a 29-year old who broke from the Chinese tennis federation a few years ago, broke from the state run system, and developed herself. She has a funny personality. She has tattoos. And she can appeal to the young generation, which is trying to break, in some ways, from traditional Chinese culture.

And here comes Li Na and a campaign: “Be yourself.’’

“That’s bold,’’ said Darren Rovell, CNBC’s sports business reporter. When Li spoke, I sent a direct message to Rovell, a friend, via Twitter to ask what he thinks. “It’s a risky move. `Be yourself.’ That’s not what the government is about. The government is about the collective. But that’s what China’s youth is striving to be – individuals. And there’s no doubt that is being allowed to happen.’’

Li is seen as a rebel of sorts in China, or at least a representative of today’s youth. China didn’t push tennis until the 2004 Olympics, when Li Ting and Sun Tiantian – have you heard of them? Me neither – won the doubles gold medal. In China, major tennis championships weren’t exactly big deals. They knew the Olympics, though. And while a women’s doubles title in the Olympics would go unnoticed in the U.S., unless it came from the Williams sisters, it did create a small spark in China. 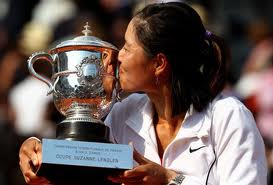 Li had a shaky relationship with the Chinese federation, upset with it controlling her scheduling, her training, her plans. Also, it took 60 percent of her earnings. In 2008, the federation allowed some athletes to go on their own, which she did. At the Australian Open in 2010, Li said the federation now takes just 12 percent.

It was a great example of how a little personal freedom could lead to so much. She reached the final of the 2011 Australian Open, her first major final, losing to Kim Clijsters. The match drew 17 million viewers in China, according to CSM Media Research-KantarSport. It was the most watched tennis match ever in China, until the French semifinals on Thursday, when Li beat Maria Sharapova to an average audience of 14.3 million. By match point, it was 25 million.

Li was strong throughout most of the match Saturday. She dominated the first set, despite the close score. Schiavone was not into the match somehow. Maybe Li was squashing her. It looked to be a blowout until Schiavone suddenly fired up, and began changing paces and styles in her usual way. Meanwhile, Li was getting nervous.

“Of course I was nervous,’’ Li said. “But I didn’t want to show the opponent. I was a little bit cheating.’’

Li served at 5-6 in the second set, and her backhand was called wide. That would have given Schiavone a set point. Instead, the call was over-ruled by the chair umpire. Li didn’t lose another point.

Women’s tennis, in dire need of something to sell, has a big chance here. It is beating other international sports to a Chinese star. It’s not that China will suddenly be tennis-crazy, but at the very least, this can start a grass roots campaign with kids there. But at this year’s Australian Open, I asked a female reporter from China about how her country saw tennis, and why tournaments there didn’t draw big crowds.

“It depends on what tournament,’’ the reporter said. “They like Federer, Nadal, the men’s tournaments. With the women, they think it is about short skirts.’’

That’s a big part of the sales pitch in the U.S., too. It’s a good guess that it took a real tennis buff in the U.S. to pay attention to Saturday’s final. It won’t be easy for American sports fans to accept, but tennis might be about to start a boom without them. Li arrives with Nike, 1.3 billion people and a built-in slogan.

I can talk tennis all day long, and often do. And yet some of the people I talk to about it might rather I talk about something else. Or with someone else. That’s how it is with tennis, right? Sort of an addiction. Sort of a high. I am a national columnist at FoxSports.com and a FoxSports1 TV insider, and have been a columnist at the Chicago Sun-Times. In 2010, I was the only American sports writer to cover the full two weeks of all four majors, and also to cover each of the U.S. Masters series events. I’ve seen a lot of tennis, talked with a lot of players, coaches, agents. I watched from a few rows behind the line judge as Serena rolled her foot onto the baseline for the footfault, a good call, at the 2009 U.S. Open. I sat forever watching a John Isner marathon, leaving for Wimbledon village to watch an England World Cup soccer game at a pub and then returning for hours of Isner, sitting a few feet from his wrecked coach. I got to see Novak Djokovic and Robin Soderling joke around on a practice court on the middle Sunday at Wimbledon, placing a small wager on a tiebreaker. Djokovic won, and Soderling pulled a bill out of his wallet, crumpled it into his fist and threw it at Djokovic, who unwadded it, kissed it, and told me, “My work is done here.’’ And when Rafael Nadal won the French Open in 2010, I finished my column, walked back out onto the court, and filled an empty tic tac container with the red clay. I’m looking at it right now. Well, I don’t always see the game the same way others do. I can be hard on tennis, particularly on the characters in suits running it. Tennis has no less scandal and dirt than any other game. Yet somehow, it seems to be covered up, usually from an incredible web of conflicts of interest. I promise to always tell the truth as I see it. Of course, I would appreciate it if you’d let me know when I’m wrong. I love sports arguments and hope to be in a few of them with you here. Personal info: One-handed backhand, serve-and-volleyer. END_OF_DOCUMENT_TOKEN_TO_BE_REPLACED
This entry was posted on Saturday, June 4th, 2011 at 11:20 pm and tagged with Francesca Schiavone, French Open, Li Na and posted in Francesca Schiavone, French Open, Li Na. You can follow any responses to this entry through the RSS 2.0 feed.
« FRENCH OPEN No Djok: Roger Federer Refuses to Turn Page of History, beats Novak Djokovic
FRENCH OPEN: Stopping the Momentum of Greatness. Rafael Nadal Will Edge Roger Federer in Another Classic »