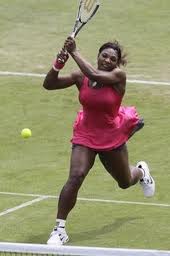 Her thigh was cramping, so she kept hitting it with her racquet in hopes of loosening it up. She was tired. She couldn’t run much any more. She barely had enough energy to do more than just dump her second serve in. This is Serena Williams rusty.

A year away from the tour with hardly any practice, and Williams just walked back in the door at the top of the game. She beat a top-40 player a day earlier, and now almost beat the player who will be the No. 2 seed at Wimbledon.

Meanwhile, Venus Williams, after six months off, returned to beat the No. 11 player in the world the first day, and then crush Ana Ivanovic 6-3, 6-2 on Wednesday.

The Williams sisters are fine. People wonder if they’re too rusty. I’m just wondering which one of them is going to win Wimbledon.

“It would be monumental in my mind if Serena pulled off a win,’’ Chris Evert said in an ESPN pre-Wimbledon conference call. Evert is a new analyst. “You can never, ever count her out. But I personally. . .don’t know how it’s humanly possible for someone to take a year off like that and have gone through what she’s been through physically with her ailments, and really hasn’t had a tremendous amount of practice, really a one‑tournament warm‑up (and then win Wimbledon). It would almost shock me if she did.’’

It would shock me if she didn’t, unless Venus wins. But this is coming down as a competition between the top of the game and the Williams sisters. The Williams sisters are historically great. But if they can just come back, and already beat the game’s top players? That’s pretty telling about both sides of the equation.

You think it’s just a measure of the Williams sisters? Well, when Rafael Nadal took off a few months in 2009 with sore knees, it took him about 10 months to get back to the top. Juan Martin del Potro, after missing a year with hand and wrist problems, has been back for months, but won’t likely won’t contend for a major until the end of the summer at the U.S. Open.

In the women’s game, Kim Clijsters took off a year and a half for maternity leave, then played two quick warmups and won the U.S. Open. Then Justine Henin, who had missed more than two years, returned from retirement and reached the Australian Open final, losing in three sets to Serena.

There is so little greatness in the women’s game, that when a little of it finally does show its face, the rest of the tour crumbles. That’s my theory, anyway. Now, the players on the top tier can prove me wrong.

“If they (the Williams sisters) get through the first week, they may be facing (Caroline) Wozniacki or (Victoria) Azarenka or Li Na or (Andrea) Petkovic, and these are players that they’ve owned,’’ Evert said, “and players that will be intimidated by them.’’

Still intimidated now? Didn’t any of these players grow up while the Williams sisters were gone? Didn’t any find greatness? Venus beat Petkovic in her first match back Monday.

Li is the most intriguing of the bunch. After winning the French, she might be finding greatness.

On Wednesday, Wimbledon chose to seed Serena No. 8. She moved up to No. 7 when Clijsters pulled out with an injured ankle. Venus is No. 24.

Please. This is an insult, particularly to Venus. And it also means she’ll have to play higher-ranked opponents earlier in the tournament than she would have if she’d have been seeded where she belongs, like No. 4 or so.

Wozniacki’s consistency might be an issue for the Williams sisters, considering how little time they’ve had to practice. Maria Sharapova, a former Wimbledon champ, might be able to stand up to them on a good day. Li is a real threat.

Other than that? No one.

Serena is going to win. I’d pick Venus, actually, because Serena has been gone for so long. But Venus, who will turn 31 on Friday, is starting to break down from age. She had been out since January with abdominal and hip problems. And she isn’t consistent enough anymore to count on her putting together seven good matches in a row.

Serena, who was out with two foot surgeries, she said, and blood clots in her lungs, has more to overcome. But her weight looks fine, and while she ran out of gas late in the second set against Zvonareva, she still almost muscled her way to the win.

At Wimbledon, she’ll play every other day, instead of every day. And she’ll have another week and a half to get ready for the money end of the tournament, where she is defending champ.

“I’ve had some serious health problems,’’ she said, “and was literally on my deathbed.’’

No matter how great she is, a deathbed should not be a good enough practice ground to win Wimbledon.

I can talk tennis all day long, and often do. And yet some of the people I talk to about it might rather I talk about something else. Or with someone else. That’s how it is with tennis, right? Sort of an addiction. Sort of a high. I am a national columnist at FoxSports.com and a FoxSports1 TV insider, and have been a columnist at the Chicago Sun-Times. In 2010, I was the only American sports writer to cover the full two weeks of all four majors, and also to cover each of the U.S. Masters series events. I’ve seen a lot of tennis, talked with a lot of players, coaches, agents. I watched from a few rows behind the line judge as Serena rolled her foot onto the baseline for the footfault, a good call, at the 2009 U.S. Open. I sat forever watching a John Isner marathon, leaving for Wimbledon village to watch an England World Cup soccer game at a pub and then returning for hours of Isner, sitting a few feet from his wrecked coach. I got to see Novak Djokovic and Robin Soderling joke around on a practice court on the middle Sunday at Wimbledon, placing a small wager on a tiebreaker. Djokovic won, and Soderling pulled a bill out of his wallet, crumpled it into his fist and threw it at Djokovic, who unwadded it, kissed it, and told me, “My work is done here.’’ And when Rafael Nadal won the French Open in 2010, I finished my column, walked back out onto the court, and filled an empty tic tac container with the red clay. I’m looking at it right now. Well, I don’t always see the game the same way others do. I can be hard on tennis, particularly on the characters in suits running it. Tennis has no less scandal and dirt than any other game. Yet somehow, it seems to be covered up, usually from an incredible web of conflicts of interest. I promise to always tell the truth as I see it. Of course, I would appreciate it if you’d let me know when I’m wrong. I love sports arguments and hope to be in a few of them with you here. Personal info: One-handed backhand, serve-and-volleyer. END_OF_DOCUMENT_TOKEN_TO_BE_REPLACED
This entry was posted on Wednesday, June 15th, 2011 at 11:12 pm and tagged with Serena Williams, Venus Williams, Wimbledon and posted in Serena Williams, Venus Williams, Wimbledon. You can follow any responses to this entry through the RSS 2.0 feed.
« Li Na: 116 Million People Can’t be Wrong. Another Look at her Amazing French Open Ratings
WIMBLEDON WEEK: John Isner-Nicolas Mahut Face Again in (Bad) Luck of the Draw »