FRENCH OPEN: Maria Sharapova Not Just for Show. Killer Barbie Back to No. 1 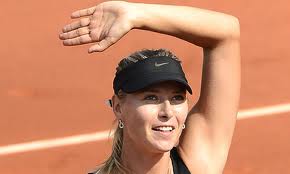 Maria Sharapova could be Danica Patrick now. She surely could have been a Go Daddy girl while dabbling in sports on the side. It would have been so easy.

Instead, with her win Thursday in the semifinals at the French Open, Sharapova will move to No. 1 in the world. She came back from career-threatening shoulder surgery. She still fights the yips on her serve at times. And a win in the final Saturday against Sara Errani will give her a career Grand Slam — at least one title in every major.

Sharapova would be just the 10th female tennis player in history to have done that. Even Venus Williams hasn’t done it.

“It’s a pretty nice feeling,’’ she told reporters as she left the court after her 6-3, 6-3 victory over Petra Kvitova. “I did not know that that (No. 1 ranking) would happen again a few years ago. So I’m just happy to be in this position.’’

She is. She is Killer Barbie.

And this is just to give people a better feel for what they’re looking at. Or, as Nike is already putting it in an ad: “THOSE WHO BELONG AT THE TOP NEVER FORGET THEIR WAY BACK.’’

The balance of sex appeal and athleticism is always a factor in women’s sports. To be honest, plenty of men are watching women’s tennis for the sex-appeal side of the equation. And there’s always a debate about whether selling sex appeal cheapens the women’s sport or just celebrates athletic bodies. So when someone like Patrick, or Anna Kournikova a few years back, makes huge sponsor dollars without winning anything, it just doesn’t look good. You can’t really expect them to pass up golden opportunities, but it’s hard to say they send the right message to your daughters.

Please read the rest of this column at FoxSports.com

I can talk tennis all day long, and often do. And yet some of the people I talk to about it might rather I talk about something else. Or with someone else. That’s how it is with tennis, right? Sort of an addiction. Sort of a high. I am a national columnist at FoxSports.com and a FoxSports1 TV insider, and have been a columnist at the Chicago Sun-Times. In 2010, I was the only American sports writer to cover the full two weeks of all four majors, and also to cover each of the U.S. Masters series events. I’ve seen a lot of tennis, talked with a lot of players, coaches, agents. I watched from a few rows behind the line judge as Serena rolled her foot onto the baseline for the footfault, a good call, at the 2009 U.S. Open. I sat forever watching a John Isner marathon, leaving for Wimbledon village to watch an England World Cup soccer game at a pub and then returning for hours of Isner, sitting a few feet from his wrecked coach. I got to see Novak Djokovic and Robin Soderling joke around on a practice court on the middle Sunday at Wimbledon, placing a small wager on a tiebreaker. Djokovic won, and Soderling pulled a bill out of his wallet, crumpled it into his fist and threw it at Djokovic, who unwadded it, kissed it, and told me, “My work is done here.’’ And when Rafael Nadal won the French Open in 2010, I finished my column, walked back out onto the court, and filled an empty tic tac container with the red clay. I’m looking at it right now. Well, I don’t always see the game the same way others do. I can be hard on tennis, particularly on the characters in suits running it. Tennis has no less scandal and dirt than any other game. Yet somehow, it seems to be covered up, usually from an incredible web of conflicts of interest. I promise to always tell the truth as I see it. Of course, I would appreciate it if you’d let me know when I’m wrong. I love sports arguments and hope to be in a few of them with you here. Personal info: One-handed backhand, serve-and-volleyer. END_OF_DOCUMENT_TOKEN_TO_BE_REPLACED
This entry was posted on Saturday, June 9th, 2012 at 3:18 pm and tagged with French Open, Maria Sharapova and posted in French Open, Maria Sharapova, No. 1. You can follow any responses to this entry through the RSS 2.0 feed.
« FRENCH OPEN: Djokovic, Federer Playing the Mind Games of Champions
FRENCH OPEN: Greed Costs Nadal, Djokovic, Tennis Great Moment in History »