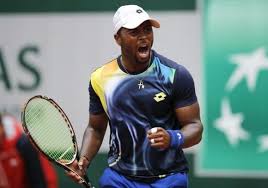 If we have learned anything from Donald Young over the years, it’s that the time to talk about his emergence is now. Today. As in, before his next match at the French Open, when everything could be ruined.

This month marked 10 years since Young’s first professional tennis match. He was 14. Of course, in his case, we knew about him even before that, when John McEnroe, playing a senior event in Chicago, walked past a court and saw Young, a ballboy, hitting groundstrokes. McEnroe was so taken by what he saw that he started hitting with Young, then ran and called his agent to tell him about this amazing kid.

That whole story was a fake, by the way. It was a publicity stunt set up by agents, and it worked to build a myth. The myth worked against Young, told a lie that everyone bought into, including Young and his parents, because U.S. tennis is so desperate for the next big thing.

But since then, Young’s career has had far too much reality, anyway. The losses. The highs followed by crushing lows. The moping. The giving up. And the contentious relationship with the USTA, which once led Young to tweet “FU—USTA!’’

The thing is, when he beat Feliciano Lopez in the second round of the French Open, Young, finally became a feelgood story again, guaranteed to last until his next match, anyway.

It’s time to take another look at Donald Young.

And maybe the USTA, too. Young has told stories of how he was childhood friends with fellow Chicagoan Taylor Townsend, who had her breakthrough at this French Open. The USTA threatened to cut funding on Townsend two years ago, saying she wasn’t fit. It was a dangerous threat, using a code word to call a teenage girl fat.

That story isn’t going to go away. CNN asked Townsend about it on Thursday, and she said that when she got the news from the USTA, she went home and cried.

So two black kids from Chicago, two prospects who were the No. 1 junior players in the world, had major fallouts with the organization charged with developing them. That said, the USTA did help

both players. And it seems to have a decent relationship with Young now. He was even placed on the Davis Cup team this spring ahead of Ryan Harrison and Jack Sock.

“Would I love to be further along by now?  Yeah, for sure,’’ Young said at Roland Garros. “But it didn’t happen. Now, I’m starting to play better – not better, but more consistent than before.

“Whenever it’s coming or it comes, I’m going to be there and ready and happy it happens. So I’m not going to be mad it didn’t happen earlier because, you know, that’s in the past and I can only deal with what’s in the future.’’

Let’s take a rundown on Young’s present. He is 24 years old, ranked No. 79 in the world. And this is the amazing thing:

If he beats Guillermo Garcia-Lopez, a player he beat the only time they played each other, on Saturday, then Young might become the second-highest ranked player in the U.S., behind John Isner. (If Jack Sock wins, too, he also could stay ahead of Young).

Is this just another momentary blip of success for Young? I’m going to be honest: It’s too close to call. Lopez might be nearly washed up. And two weeks ago in Nice, Young lost in qualifying 6-1, 6-2 to a player barely ranked in the top 200. Last month, he lost to players ranked 382 and 221.

But he also has wins this year over Juan Monaco, Carlos Berlocq, Jarkko Nieminen and Andreas Seppi. Those aren’t household names in the general sports world, but the tennis world knows who they are. And Young took sets off Andy Murray, Kei Nishikori and David Ferrer.

And look at Young’s muscles. He is suddenly loaded with them. “Yeah,’’ he said, “I’ve been in the gym quite a bit with my trainer.’’

That leads you to believe in his work ethic. The word about him was always that he didn’t have one.  He said that when he was younger, he was doing things other kids his age couldn’t do. So he took his success for granted and didn’t work hard enough.

Young’s past clouds the view. But at 24, he is actually just coming into his prime now. He seems mature now. We are about to find out how far he can go.

I’ve tended to agree with Young and his family on their disputes with the USTA. Young’s parents have always been overly present. It didn’t look good at minor league events when his parents were always there, treating him like a kid.

Eventually the USTA finally had enough of Young’s parents. USTA officials sent Young’s family a letter, he once told me at the U.S. Open, telling him he had to use USTA coaches, not his parents. And if he didn’t, the USTA would cut off his funding.

The USTA said it needed to be able to have some control in decisions made about its investment. Young chose his parents.

I first met Young and his parents at a South Side Chicago park when he was a kid, and agents were already trying to sign him up. Soon, he would be pumped up too much. For example: Why was I, a Chicago Sun-Times columnist at the time, watching a little kid play tennis? I believe Young’s family bought in too much because they figured if John McEnroe thought their son was the next great thing, then surely he was.

That led to friction and fights over how he was treated while a child should have been having a childhood.

Once, The New York Times wrote a piece about Young’s failures in its Sunday magazine called, “Prodigy’s End.’’

So it’s testimony to Young’s resilience that he is still here, having his best moment. I’d like to congratulate him on his perseverance.

But he has a match Saturday.

I can talk tennis all day long, and often do. And yet some of the people I talk to about it might rather I talk about something else. Or with someone else. That’s how it is with tennis, right? Sort of an addiction. Sort of a high. I am a national columnist at FoxSports.com and a FoxSports1 TV insider, and have been a columnist at the Chicago Sun-Times. In 2010, I was the only American sports writer to cover the full two weeks of all four majors, and also to cover each of the U.S. Masters series events. I’ve seen a lot of tennis, talked with a lot of players, coaches, agents. I watched from a few rows behind the line judge as Serena rolled her foot onto the baseline for the footfault, a good call, at the 2009 U.S. Open. I sat forever watching a John Isner marathon, leaving for Wimbledon village to watch an England World Cup soccer game at a pub and then returning for hours of Isner, sitting a few feet from his wrecked coach. I got to see Novak Djokovic and Robin Soderling joke around on a practice court on the middle Sunday at Wimbledon, placing a small wager on a tiebreaker. Djokovic won, and Soderling pulled a bill out of his wallet, crumpled it into his fist and threw it at Djokovic, who unwadded it, kissed it, and told me, “My work is done here.’’ And when Rafael Nadal won the French Open in 2010, I finished my column, walked back out onto the court, and filled an empty tic tac container with the red clay. I’m looking at it right now. Well, I don’t always see the game the same way others do. I can be hard on tennis, particularly on the characters in suits running it. Tennis has no less scandal and dirt than any other game. Yet somehow, it seems to be covered up, usually from an incredible web of conflicts of interest. I promise to always tell the truth as I see it. Of course, I would appreciate it if you’d let me know when I’m wrong. I love sports arguments and hope to be in a few of them with you here. Personal info: One-handed backhand, serve-and-volleyer. END_OF_DOCUMENT_TOKEN_TO_BE_REPLACED
This entry was posted on Friday, May 30th, 2014 at 9:37 pm and tagged with Donald Young, French Open, Taylor Townsend, USTA and posted in Donald Young, Feliciano Lopez, Taylor Townsend, US tennis, USTA. You can follow any responses to this entry through the RSS 2.0 feed.
« FRENCH OPEN Dominance Done: Serena Williams Loses More than a Match
FRENCH OPEN: Federer Modernizes Racquet, Not Game. Needs New Math to Become Roger WhyNot »

One response to “FRENCH OPEN Ten Years of Donald Young. Time for Another Look?”