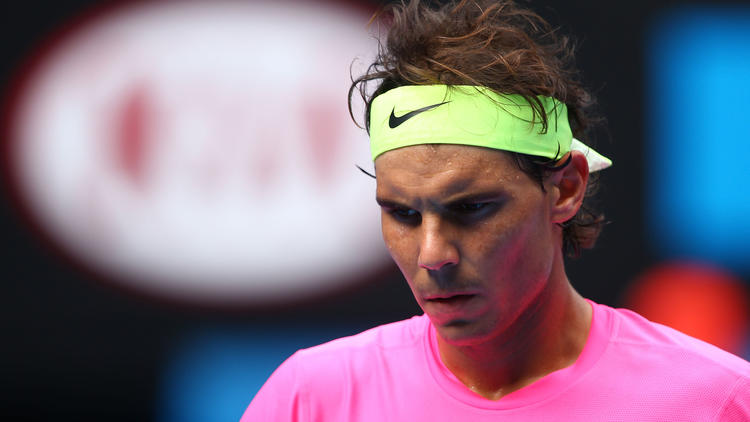 It takes a recklessness to be Nadal. It’s not only about running with abandon, but also about throwing everything you have with every single body part into every single motion. It is to push limits, to create energy and adrenaline so powerful that even people watching can feel it. To be Nadal is not to float gracefully like Roger Federer, but to storm the court like no one before.

Rafael Nadal warned us. He said he wasn’t ready to win this tournament, that he was rusty from his time away because of injuries. He said Tuesday that reaching the quarters was a good step. But are we supposed to believe his words — and, those of ESPN’s analysts who think he just needs practice — or our own eyes? Because what I saw was this:

Nadal’s body is broken. It’s amazing he lasted this long, to 28. How long would your car last going pedal to the metal all the time?

“I am feeling OK,” he told reporters. “Just was not my day. I didn’t play with the right intensity, with the right rhythm. And the opponent played better than me.”

But you were rubbing your hamstrings. And you took some sort of medicine during the third set.

Truth: Nadal hates it that people think he blames injury for losses. More truth: Injury was the reason for this loss.

Well, actually I don’t think it was injury, though that’s how Darren Cahill portrayed it. Maybe he’s right. I hope he’s right. But I suspect this is just Nadal’s normal state now. He has put his body through torture for so long.

But the problem against Berdych wasn’t rust or timing. Nadal can’t change directions on a dime — as

they say — anymore. He would move to his right and run around his backhand, or just drive into one. And then?

Berdych would hit winner into the open court on Nadal’s forehand side. Berdych has a big forehand, but it’s not coming from a rifle. Nadal wasn’t even getting into the TV picture. There were glimpses of what was happening, though. Nadal was stuck and his legs couldn’t dig him out. I’d say he looked like a car with wheels spinning in the mud, but his wheels weren’t spinning.

Nadal can still run fast when he gets going. But to lose that split second while stuck in the corner means he can’t cover the court the way he always has. Which meant he couldn’t get into his usual position. Which meant, for the first two sets anyway, he couldn’t get anything behind his shots.

Which meant he wasn’t Nadal.

I guess you can only run as fast as possible and slide 10 feet on asphalt so many times. Novak Djokovic is going to learn that soon, if he isn’t already.

Berdych was oustanding, but it’s not that difficult to hit shots into an open court.

What is the total of what Nadal has been through in the past year, anyway? A wrist problem, stem cell treatment on his back, more knee troubles and an appendicitis? Not to mention his back breaking down in the middle of last year’s Australian Open final.

Nadal has always had injuries, followed by miracle recoveries. But the injuries are getting more frequent and more severe now. And against Tim Smyczek in the second round of the Australian, he started cramping all over his upper body. Against Berdych, it appeared to be his legs again.

It’s going to be a miracle of timing for him to play seven best-of-five set matches to get through a major. Maybe it can still happen at the French, where his movement was so much better than everyone else’s that he can overcome a little loss of movement.

The rest of the time, he’s going to have to adapt. End points quicker. Play closer to the baseline. I know how the score looks, but Nadal almost found a way to beat Berdych anyway. It show just how good he is that he can do that with a broken body.

This is going to be the grinding phase of Nadal’s career. You cannot count on his body anymore. I just don’t know how much more he can do if he’s not Nadal.

I can talk tennis all day long, and often do. And yet some of the people I talk to about it might rather I talk about something else. Or with someone else. That’s how it is with tennis, right? Sort of an addiction. Sort of a high. I am a national columnist at FoxSports.com and a FoxSports1 TV insider, and have been a columnist at the Chicago Sun-Times. In 2010, I was the only American sports writer to cover the full two weeks of all four majors, and also to cover each of the U.S. Masters series events. I’ve seen a lot of tennis, talked with a lot of players, coaches, agents. I watched from a few rows behind the line judge as Serena rolled her foot onto the baseline for the footfault, a good call, at the 2009 U.S. Open. I sat forever watching a John Isner marathon, leaving for Wimbledon village to watch an England World Cup soccer game at a pub and then returning for hours of Isner, sitting a few feet from his wrecked coach. I got to see Novak Djokovic and Robin Soderling joke around on a practice court on the middle Sunday at Wimbledon, placing a small wager on a tiebreaker. Djokovic won, and Soderling pulled a bill out of his wallet, crumpled it into his fist and threw it at Djokovic, who unwadded it, kissed it, and told me, “My work is done here.’’ And when Rafael Nadal won the French Open in 2010, I finished my column, walked back out onto the court, and filled an empty tic tac container with the red clay. I’m looking at it right now. Well, I don’t always see the game the same way others do. I can be hard on tennis, particularly on the characters in suits running it. Tennis has no less scandal and dirt than any other game. Yet somehow, it seems to be covered up, usually from an incredible web of conflicts of interest. I promise to always tell the truth as I see it. Of course, I would appreciate it if you’d let me know when I’m wrong. I love sports arguments and hope to be in a few of them with you here. Personal info: One-handed backhand, serve-and-volleyer. END_OF_DOCUMENT_TOKEN_TO_BE_REPLACED
This entry was posted on Tuesday, January 27th, 2015 at 6:31 pm and tagged with Australian Open, Rafael Nadal, Tomas Berdych and posted in Australian Open, Rafael Nadal, Tomas Berdych. You can follow any responses to this entry through the RSS 2.0 feed.
« AUSTRALIAN OPEN: Venus Williams Getting Her Farewell Run? No Way (I Think)
AUSTRALIAN OPEN: Real Housewives of Tennis and the Welcome Tension of Andy Murray and Tomas Berdych »