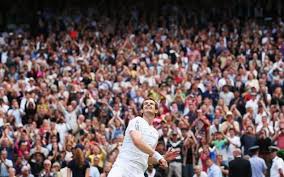 REPORTING FROM THE ALL ENGLAND CLUB IN WIMBLEDON

It can be fun to laugh at the panic attacks that Britain has over Andy Murray. Fans want him to win soooo badly at Wimbledon, but they know he’s going to lose. They feel it in their bones. It drives them nuts. It defines them, too.

Wanting a close-up of such fun, I made sure to arrive at Centre Court ahead of time Wednesday, after the early match but before Murray’s. And finally, he and Fernando Verdasco took the court to … polite, quiet applause.

Look, this was a quarterfinal match at the place that will define Murray’s career, and through three games, the stands were half empty. The first set was nearly over, and it still wasn’t packed?

People were arriving casually. No panic. I felt cheated.

What happened? Fans had left after the first match to have a few drinks.

Please read the rest of the column here