AUSTRALIAN OPEN: Venus Williams Getting Her Farewell Run? No Way (I Think) 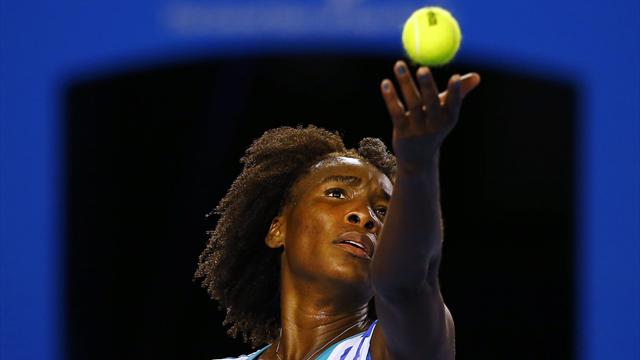 The tennis gods like to give aging superstars one last good-bye run. Jimmy Connors, Andre Agassi, Pete Sampras. It’s a graceful way out. And it’s something about luck mixed with wringing out the last drops of greatness mixed with making adjustments to account for what has been lost.

Everything sort of comes together at the same time. And that brings me to Venus Williams, who is suddenly relevant again, reaching the quarterfinals of the Australian Open after beating sixth seed Agnieszka Radwanska Monday 6-3, 2-6, 6-1. Williams was excellent, awful, excellent. In that order.

But here’s the thing: I’m not sure this is a one-last-run thing. Someone forgot to tell Venus this is her farewell tour. That’s what I was thinking it was.

Now I’m thinking it’s her comeback tour. But know this: I could be way off. It’s too close to tell.

“For me, it’s all about the title,” Williams, who’s 34, told ESPN’s Mary Joe Fernandez, who had asked about her feelings of getting deep into a major again. “It’s not about a good showing anymore. I’m past that time.”

Venus, who hasn’t been this deep in a major since 2010, doesn’t understand the nostalgia.

It’s just hard to know exactly what we’re seeing. It might be luck: The first top player she faced in Australia is Radwanska, one of the few high-ranked players Williams can overpower.

And maybe her body is just in a good cycle now with her Sjogren’s syndrome, which steals her energy. Her fight against that is permanent.

Or she might have found the right diet and medication. Or, she could take the court against Madison

END_OF_DOCUMENT_TOKEN_TO_BE_REPLACED

AUSTRALIAN OPEN: Roger Federer Falls Flat. Age Doesn’t Have to Look Like This (Yet)

Forgive Roger Federer for getting old. It happens, and at this point he can still deal with it. But does that mean he has to be scared and stupid, too?

Whatever. He’s 33 and there will be days like this now.

But when Andre Agassi got old and his legs wouldn’t straighten and he’d stumble over the paint on the baseline, he actually moved in even tighter to the baseline and cut off all angles to reduce running.

He dealt with it and figured out how to win a little longer. Federer? He panicked. Before Friday, he had been getting used to a new, modern racquet and developed a more aggressive style with Coach Stefan Edberg.

Well, what happened to that guy?

“It was just an overall feeling I had today that I couldn’t really get the whole game flowing. . .” he told reporters. “I think that was because overall I wasn’t feeling it quite as well. I had to play it a little bit passively at times when normally I would play aggressive.”

John McEnroe and Chris Evert were both on ESPN talking about what happens when a great player starts to get old: You have inexplicably bad days when your body just won’t do what it’s supposed to. They were having flashbacks in Federer’s match.

But they were remembering an advanced stage of tennis aging. Federer

END_OF_DOCUMENT_TOKEN_TO_BE_REPLACED

AUSTRALIAN OPEN: Tennis has Smyczek’s Moment of Sportsmanship, NFL has Deflategate. Which One Do We Really Respect?

Four hours into the fight Wednesday, Tim Smyczek, Packers fan from Milwaukee, was sticking with Rafael Nadal, greatest player of all time, at the Australian Open. It was one of those moments when you reach heights that. . .”He was sick and not playing well,” Smyczek said, trying to ruin the story.

Whatever. Nadal led 6-5, 30-love, fifth set. He tossed to serve and someone in the crowd screamed. It distracted him and he missed wildly. And then what? Here’s what: Smyczek secretly took the ball, stuffed it in his pocket, reached down and popped a hole in the seam with his fingernail. The ball turned to mush, which meant that it wouldn’t bounce much, negating Nadal’s wicked topspin.

Smygate! The American way! No wait. That’s not what happened. Smyczek didn’t Belichick the ball at all. What really happened was this: He told the chair umpire to let Nadal hit his first serve again. A do-over was not required under the rules. Nadal then served again and won the point. A few minutes later, Nadal won 6-2, 3-6, 6-7 (7-2), 6-3, 7-5.

Sportmanship lives. Smyczek did it at risk to his career moment. It was the right thing, wasn’t it? Because it stands in such stark contrast to the big story in sports today: the New England Patriots deflating 11 of the 12 footballs used in the AFC title game, theoretically to fit better into the small hands of Patriots quarterback Tom Brady.

“What he did at the end of the fifth was just amazing,” Nadal said afterward, talking about Smyczek, not New England coach Bill Belichick. “Very few players can do that after four hours. . .He’s a great example, what he did today.”

END_OF_DOCUMENT_TOKEN_TO_BE_REPLACED

AUSTRALIAN OPEN: The Myth of Sloane and ESPN’s Role in It

Sloane Stephens’ arrival was always a myth. That’s the cold truth. American tennis is so desperate for something to hold on to that Stephens was promoted from prospect to arrival to star even though none of that ever really happened.

That’s not her fault, though she seems to have believed in the Myth of Sloane And now, it’s too late to go back to being a prodigy.

She lost to Victoria Azarenka for the third year in a row at the Australian Open. This time, it was 6-3, 6-2 in the first round. And while people are openly wondering what went wrong with Stephens, I can tell you this:

Nothing went wrong. She has not gone backward. She is the same player she always was. She is just standing still, unable to climb the last step to the top that her current critics/former supporters pretended as if she had climbed two years ago. Why did they pretend? It was a sales pitch meant to help them, not to reflect on Stephens.

She is not a young quarterback who won the Super Bowl, but never went back. She didn’t win 20 games as a rookie Major League pitcher and then fizzle out. She has never won a tournament. Not a major, not a minor.

END_OF_DOCUMENT_TOKEN_TO_BE_REPLACED

AFTER OZ: Novak Djokovic Now Has Signature Moment, Moves on to Fight Through History

Every athlete needs a signature moment to make history. Titles and championships and stats are needed too, of course. Something has to fill the record books. But the moment adds pictures and memories and oohs and aahs to the words and numbers.

Muhammad Ali had the Thrilla in Manilla, and another one in Zaire. John Elway had The Drive, and Joe Montana The Catch, and Willie Mays the over-the-shoulder nab. Babe Ruth pointed (supposedly) to the bleachers. Michael Jordan? Well, he had a bunch of them.

So after Novak Djokovic beat Rafael Nadal in 5 hours, 53 minutes in the final of the Australian Open Sunday, he took the microphone and told Nadal over the PA system: “We made history tonight.’’ He was talking about it being the longest major final ever.

The truth is, Djokovic moved into history because of the match itself.

A classic. An epic. It might have been the greatest match ever played, though I’m still putting Nadal’s moment – the win over Roger Federer at Wimbledon – ahead of it, as well as at least one of the Bjorn Borg-John McEnroe Wimbledon finals.

But this was the greatest example of two athletes reaching their absolute physical, mental and emotional limits, giving every last drop.

From my column in FoxSports.com:

Imagine a cartoon: Roger Federer standing on top of a mountain, or maybe floating a few inches above it, saying “This is the golden era of tennis.” Meanwhile, a bunch of other players, including Rafael Nadal, hurt with crutches and bandages are in a pile at his feet.

You might have heard that Federer and Nadal — the greatest, nicest individual rivalry in sports — are having a tiff. Nadal complains that the tour has too many mandatory events, is too grueling, has almost no offseason and is beating up the players. Federer, as the president of the player council, doesn’t seem to notice.

“For him, it’s good to say nothing,” Nadal said. “Everything positive. ‘It’s all well and good for me. I look like a gentleman,’ and the rest can burn themselves.”

Nadal is right. Federer is oblivious. But this is a much bigger problem than two superstars bickering. The players are in serious need of a union. So many of them know it, but they just can’t seem to figure out how to get it done. At the US Open in September, Nadal, Andy Murray and Andy Roddick went in unity to tournament officials to complain about being forced to play on slippery, rained-on courts just to make TV networks happy.

“It’s the same old story,” Nadal said. “All you think about is money.”

That seemed to be the beginnings of a union. Now, Federer suddenly is an obstacle. And Nadal is example No. 1 of why the union is needed. So the rivalry takes on a different tone.

What makes Nadal an example? The thing is, at just 25, he is starting to get old. He can feel it. He can see it.