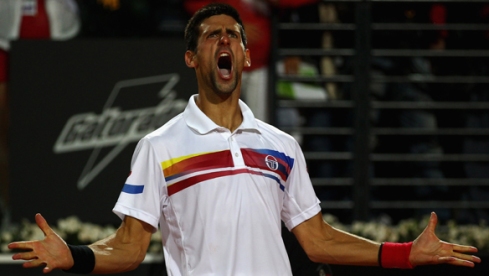 Novak Djokovic doesn’t just have Rafael Nadal’s number, he also has his address, his email, his Facebook page and his girlfriend’s number, too. Four straight wins over Nadal in the past two months, including Sunday’s 6-4, 6-4 win in the Italian Open.

So the French Open starts this Sunday, and the chase is on now in men’s tennis. But it’s going in reverse order, with No. 1 trying to catch No. 2.

Djokovic has blown right past Nadal. And maybe I’m just in denial or something, but I still think Nadal is going to win the French. If so, it will be a typically goofy moment for tennis’ goofy computer rankings, as Nadal beats Djokovic in the final to re-establish himself. He will have won four of the past five majors, including two final wins over Djokovic.

Next day? Djokovic will climb over Nadal to No. 1. That’s how this is set up.

Whatever. If Djokovic wins, everything makes sense. And at this point, that’s what most people expect. There are no more excuses or reasons for Djokovic beating Nadal. It’s not that Nadal is coming back from injury, or that anything can happen on any given day. In Madrid, the high altitude and speedy clay favored Djokovic.

In Rome Sunday, no altitude issues, healthy Nadal, French Open-like clay and conditions. But I don’t think this was the moment when Djokovic finally made his point to Nadal. That happened a week earlier, in Madrid.

This was the moment the chase started. On Sunday, Nadal was making an unbelievable concession. Instead of waiting to see how he would do against Djokovic with circumstances favoring him, he cut and ran. Nadal was acknowledging that Djokovic is better now, or at least that he’s playing better.

Nadal wanted to beat Djokovic, but this was about when and where. While they were playing in Italy Sunday, Nadal was trying to beat Djokovic in Paris three weeks from now. END_OF_DOCUMENT_TOKEN_TO_BE_REPLACED