REPORTING FROM THE ALL ENGLAND CLUB IN WIMBLEDON

Briefly choking up Tuesday, Serena Williams remembered meeting Nelson Mandela as “probably one of the best moments of my life.’’

And Williams, who has served to break down walls as an African American in a traditionally white sport, spoke about Mandela’s “forgiving heart.’’

“I think his whole example is an extremely important part of our lives,’’ she said. “For someone to have been incarcerated for so long . . . to have such an open heart, open spirit, open soul is unheard of. 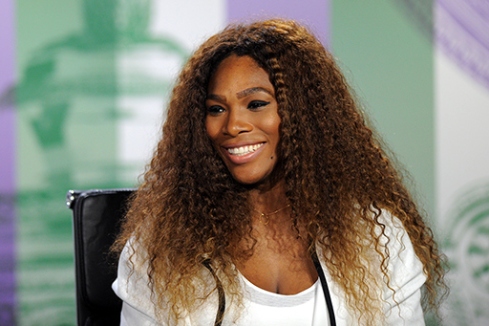 James Blake Back in the Minors. Grinding it out or in Denial?

Thirty-one years old, on sore and chronic bad knees, and out of the top 100, James Blake has turned up in tennis’ minor leagues. Tallahassee, Sarasota, and now Savannah. At some point, you have to know when to say when. At some point, it’s a little sad, and sickening, to see a former top athlete do something like this.

It might turn out that Blake is done, but I don’t think so. I applaud him for what he’s doing. In fact, last year at the U.S. Open, I asked him if he would be willing to drop down to Challenger level events if needed, the way Andre Agassi did years ago to build things back up. He said he might.

Now, here he is, winning the tournament in Sarasota, Fla., Sunday, beating American Alex Bogomolov, Jr. 6-2, 6-2 in the final. In the semis, he beat No. 65 Ryan Sweeting in straight sets.

That does not sound exciting, I know. For so long, Blake was the No. 2 face of American tennis, behind Andy Roddick. Now, he’s not even on the tennis map anymore, really.

This takes guts. It’s not something you see a lot of the best tennis players doing. It was just Jan. 1, 2007 that the top of the rankings went like this: Federer, Nadal, Davydenko, Blake.

So Blake is either 1) admirably willing to go back to the grind or 2) in denial. I’m going with No. 1.

The point is that he’s stringing together wins for the first time in a while, having won seven of eight matches in the past couple weeks, not counting a walkover. He is gaining momentum.

He told me the leading up to Sarasota, he had the best week of practice his knees allowed him to have in two years, and he “felt like I played better and better as the week was going on.’’ END_OF_DOCUMENT_TOKEN_TO_BE_REPLACED