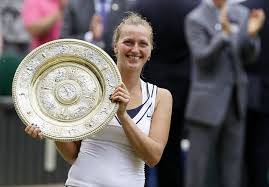 The theme of the match was Genie Bouchard, her emergence. That’s what the moment was about. Tennis has a new superstar, one who is young, fresh, and tough as nails with marketers already drooling over her good looks.

Well, the match didn’t live up to that. The other person won. It wasn’t even close. Petra Kvitova won 6-3, 6-0 in 55 minutes, playing great and knocking Bouchard into a stupor. That’s two Wimbedon titles for Kvitova, who came from nowhere to win the first one three years ago, when she was 21, and then disappeared for three years, and now came back to win again.

The problem is that the match never was going to be about Kvitova. The tennis world just saw Kvitova, loaded with talent but not enough focus or footwork, put it together again for two weeks and win Wimbledon. I wish I had the feeling that the rest of the sports world saw it that way, and not, roughly, this way: 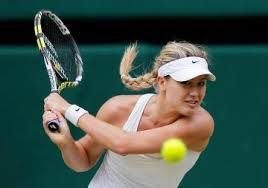 You know how people dress up to play a character on TV, and then look totally different when you see them on the late-night shows or something? Sheldon — Jim Parsons — wore a suit and sunglasses in the friends box at Wimbledon and it was incredible: Even without his Flash shirt, he still managed to look like a science geek anyway.

In fact, it looked as if he had beamed himself into Centre Court and was trying to remain incognito.

Honestly, I’m not sure what’s going to happen with Bouchard now. This hurt her. She doesn’t look quite as sure of a sure thing as she did before the match. She is just 20, and has reached the semis in two majors and the finals in one this year. She has played in just six majors, and is already the most consistent player in majors on tour this year.

But, as ESPN’s business writer, Darren Rovell tweeted after the match, “Marketers now face dilemma. Is she worth big $?” He had said just before the match that she was poised to be an ad idol.

I think they will, on spec. She is still the most marketable new face to come out of this tennis season, and tennis is still the only women’s sport to have broken into the mainstream. Bouchard is too hot of a prospect to let someone else get to first. 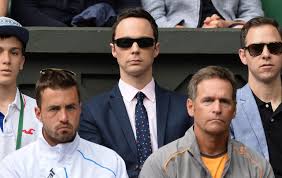 That said, she was demolished Saturday, and didn’t even make it a fight.

Anyway, welcome back, Petra Kvitova. Welcome to the Hall of Fame when it’s all over for you. Which won’t be for another decade.

She is just 24 and had somehow managed to already be forgotten. She didn’t fit in with the 30-something stars, Serena Williams and Li Na. She hadn’t done enough to

END_OF_DOCUMENT_TOKEN_TO_BE_REPLACED

WIMBLEDON: What’s Wrong With Overly Emotional Serena Williams? She Almost Lets Us in to Find Out 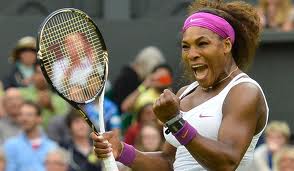 REPORTING FROM WIMBLEDON, ENGLAND — Serena Williams never quite lets us in.

Her news conferences and interviews are acts. So when she throws a tantrum or breaks down crying or, better yet, plays doubles with her sister, Venus, and interacts in such a loving way, it is so different and revealing.

Something has been wrong with her lately, and it’s hard to know what it is. But she was awful at the French Open and was overly emotional during her early matches at Wimbledon, pumping her fist and screaming “Come on!”even after her opponent would miss a simple shot. She was winning close matches but not playing well.

On Tuesday, in the quarterfinals against defending Wimbledon champ Petra Kvitova, Williams sat between games with a dazed look in her eyes, held her hands up and took slow, deep breaths. She was calming herself as a routine.

It would end up as the best big match she has played since last year’s US Open, when she was still in her 20s. Williams beat Kvitova 6-3, 7-5, and it was the old Williams, dominant with the serve, powerful.

Still not moving particularly well, but whatever — Williams is two wins from her fifth Wimbledon title. 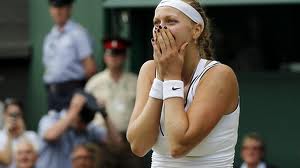 This was the breakthrough of a new generation and the breakdown of a champion. Those things worked together, as Petra Kvitova won Wimbledon Saturday, beating Maria Sharapova 6-3, 6-4. Every major in women’s tennis lately seems to produce a heart-warming story of some emerging 29-year old, or the dominance of someone coming back from retirement/maternity leave. Kvitova becomes the first player born in the 1990s to win a major.

“I like the big, big challenges like this one,’’ Kvitova said in an interview with NBC as she left the court. “I like the final and the big crowd and big matches. It’s, uh, I don’t’ know, I just played my best tennis and I won.’’

“I was nervous before the match. When I came on the court, it was OK.’’

And that described the match perfectly. Kvitova was impressively calm. Sharapova, the experienced one, was a mess. END_OF_DOCUMENT_TOKEN_TO_BE_REPLACED