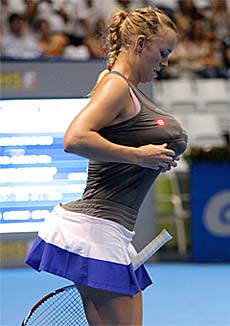 The problem with people who talk and write for a living is that they always have to say something. Have to. It has to be loud, too, if they want to get hits online or ratings on TV. The formula? Inflame an issue quickly, then boil it down to sound bites that can be defined in clear, black-and-white, up-or-down points against the person sitting at the other side of the table.

They are always looking for something, anything, as jumping-off points to start a five-alarm fire. That’s how Caroline Wozniacki was set up Tuesday. She was the patsy in a bogus modern-media frenzy.

She innocently, jokingly impersonated her friend, Serena Williams, at a tennis exhibition in Brazil. She used a towel to pad her chest to cartoon levels, and another one to pad her rear end. It was possibly racially insensitive, or possibly just funny.

Wozniacki was labeled a racist, and it went viral. International.

And it was unfair. Her little act was not racist. Insensitive, maybe, but not racist.

“You can make as much fun as you want to,’’ Whoopi Goldberg said on “The View.’’ “She’s still going to beat your ass.’’